Transboundary collaboration is enabling the restoration of a major biodiversity hotspot in the Upper Guinean Forest Eco-Region. Liberia and Sierra Leone are conducting joint and independent initiatives to ensure the conservation of the Gola Peace Park which straddles their shared boundary, encompassing a park on either side.

In 2011, Liberia and Sierra Leone signed an agreement to conserve the Gola Peace Park which encompasses the connected national parks on either side of the border. The two countries are approaching conservation differently yet in a complementary way. First, Sierra Leone’s Gola Rainforest Conservation Company employs rangers to monitor illegal activity and conducts periodic assessments of deforestation. The conservation project in Sierra Leone is supported by the Reduced Emissions from Deforestation and Degradation (REDD+) program. Second, Liberia aims to promote forest connectivity by establishing community forests to connect the various parts of the Gola Peace Park within and across its borders. In collaboration with international conservation groups, the two countries are promoting “rainforest-friendly livelihood” activities including beekeeping, farmer field schools, cocoa farming, and the planting of nitrogen fixing plants.

The Upper Guinean Forest Eco-region is one of three biodiversity hotspots in Africa but has unfortunately suffered extensive deforestation. The Greater Gola Landscape is the largest remnant of this Eco-region and straddles the boundary between Sierra Leone and Liberia. Thus, several government agencies and international NGOs are working with local forest management and conservation bodies to promote a landscape-scale and transboundary management scheme.

In Sierra Leone, the reported net estimated GHG removals through sequestration from 2012-2019 in the REDD+ project area was 460,000 tCO2e and net estimated avoided emissions during this same time period was over 3 million tCO2e in 2018 (1). Modelling predicts that avoided greenhouse gas emissions from avoided deforestation of the Greater Gola Landscape is likely over 800,000 tonnes per year. Current models predict it has likely now sequestered 5 million tCO2e (3).


Species monitoring suggests that several Critically Endangered or Endangered species are benefitting from the conservation and restoration efforts showing impacts on conservation status within the parks. Camera trap surveys within the parks have also found 23 medium to large bodied mammals, including endangered and previously unrecorded species indicating high species diversity (2). It is also reported to be the only site in West Africa where the chimpanzee population is not decreasing (1).The implementation of the community forest programs and REDD+ have contributed to likely increases in biomass, habitat quality, and ecosystem connectivity.

Project activities from the community forest programs in Liberia have likely played a role in decreasing poverty levels and increasing well-being. Of households surveyed at the end of the project, 56% reported improved well-being and 70% reported improved income (1). The project works to build local agricultural capacity with the establishment of 35 farmer field schools which have over 450 members learning about sustainable farming techniques. There are also 35 community-managed loan schemes to support communities in purchasing the farming supplies they need (3). In Sierra Leone, the project has allowed for the employment of 150 local staff and improved livelihoods for 24,000 people across 122 communities. Gola forest-friendly chocolate has been found to create an income stream that gives chiefdoms in Sierra Leone the ability to invest in schools, water pumps, hospitals, and student scholarships (1).

The current governance structure is a diverse mix of NGOs, aid organisations, and national conservation authorities working to achieve productive collaboration in protecting this international landscape. This cooperation includes the Society for the Conservation of Nature in Liberia, Forestry Development Authority, Conservation Society of Sierra Leone, Royal Society for the Protection of Birds, USAID, the EU, Gola Rainforest Conservation Limited by Guarantee, Birdlife International, and the national authorities (1,4). This governance strategy relies on these partnerships to be collaborative and generate positive approaches to conservation and sustainable forest management (4).

Financing for the project was provided through government entities with facilitated delivery occurring through NGOs. The West Africa Biodiversity and Climate Change project funded by USAID was supporting work in the region until June 2020, and then a European Union grant facilitated by Birdlife international took over from there starting in July 2020 (5). REDD+ has also been integrated as a core funding mechanism for parts of the project generating carbon offset revenues and further supporting the local community (1).

UNEP-WCMC created a technical report which aimed to highlight current monitoring efforts within the transboundary peace park, and where those monitoring efforts could be expanded. With a focus on biodiversity, the report pointed out that existing monitoring schemes exist for some mammal and amphibian species as well as flagship species such as pygmy hippos and rock fowl. The report then lays out which groupings of species (such as fresh water fish, large mammals, and more amphibians) could be used as a monitoring program not only for biodiversity indicators, but also as indicator species for the wider impacts of climate change on local biota (6).

With the increase in both wildlife protection and sustainable cacao farming, wildlife crop foraging became a point of local concern. In a survey of 71 local farmers it was found that wildlife crop foraging was the greatest issue of concern, with specific blame being heavily attributed to chimpanzees despite them not doing the majority of the damage (2). This points to the need for greater information sharing regarding which animals are crop foraging and implementation of co-existence and deterrent tactics within the agricultural lands. 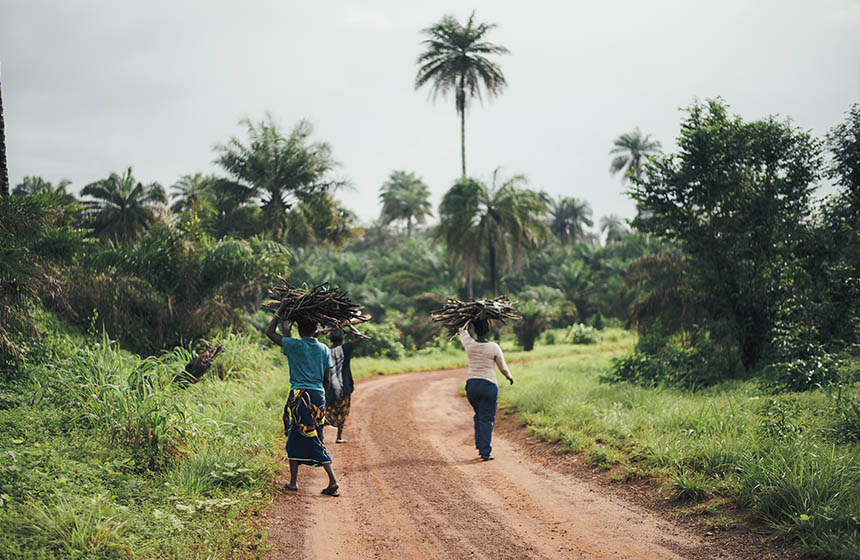