Residents of Grenville Bay have carried out reef enhancement and restored mangrove forests to combat the consequences of sea level rise including coastal erosion, flooding, and greater storm surges. The engineered artificial reef structure used in Grenville Bay provides a stable substrate for coral colonization and restoration of habitats for fish and other species. The design of the reef enhancement project was informed by wave energy modeling, in-depth measurements of the seabed, and continuous engagements with community members of Grenville. The intervention was intentionally made modular, easy to assemble on-site, and significantly porous to allow for habitat enhancement. Fishers and commercial divers from the area both constructed and installed the artificial reef using locally available materials including cement, steel, cinder blocks, and stones from an adjacent quarry. Community members also worked to improve the biological barrier of the shoreline through the planting and nursing of mangrove seedlings to restore the habitats that had previously been lost to coastal erosion.

Grenville Bay in Grenada was faced with the combined threats of coastal erosion, sedimentation, and rising sea levels. As the Bay’s coastline began to erode it caused both ecological economic threats to the local community as the important harbor risked being blocked by sediment requiring dredging (1). As an alternative to structural measures to combat coastal erosion that can sometimes compromise coastal habitats, reef enhancement aims to strengthen existing reefs through the building and planting of artificial reef-like structures. These structures will over time become integrated into the existing reefs through the commingling of habitats and coral regeneration. Reef enhancement measures improve the capacity of formerly degraded reefs to break wave energy, reduce coastal erosion, and minimize flooding.

Although climate mitigation benefits have not been quantified from the project, the planting and regeneration of a lost mangrove habitat is likely to contribute to restoring the carbon sink potential of the area. Carbon storage in these shallow coastal ecosystems has high potential and is often under-reported (2).

Though scientific studies are needed to validate the claims, residents of Grenville have reported that reef enhancement had succeeded in breaking wave energy as designed, likely contributing to potential reductions in coastal erosion and flooding. Wave energy modeling showed that original reef degradation likely was the biggest contributor to coastal erosion, so through restoring the reef it both addresses the current erosion problem and builds greater adaptive capacity for future climate impacts (1).


Within 12 months of installation, a significant level of coral recruitment was observed on various parts of the structure, and there are anecdotal reports that fish, octopus, and lobster have moved into the artificial reef structure leading to an increase in species richness. A systematic review of artificial reef restorations within the region found that artificial reefs are capable of supporting high levels of fish species richness and diversity (3).

The local fishing industrusty stands to benefit from both the infrastructure and biodiversity benefits. The reef can help limit the siltation of the main navigation channels within the port, while local fishermen have already taken an interest in the octopus and lobster the reef attracts. The construction of the reef, and subsequent further investments also relied on local communities’ labor generating further sources of income (1).

The project exists as a collaboration between the Government of Grenada and local communities as part of Grenada’s coastal protection infrastructure. In synchronization with this, there is an effort for the community to establish water quality monitoring and beach profiling programs. The Nature Conservancy worked to further train local community leaders and develop a community action plan in relation to maintaining coastal ecosystem health (4).

The project was spearheaded by the Nature Conservancy’s “at water’s edge” program, with additional support being provided by the German federal foreign office, Carnival Cruise Lines, Angell Foundation, the Grenada Fund for Conservation, Grenada Red Cross Society, and the Government of Grenada (4). Funding to finish the project has been earmarked by the Nature Conservancy for “At the Water’s Edge Phase II” which will focus on continued reef restoration and shoreline stabilization.

Since the pilot reef installation in 2015, the reef has been monitored yearly to test the effectiveness of the design and implementation. Data is collected on stability and physical performance; corrosion; sandblasting; growth and mortality of coral transplants; coral recruitment; fish usage; and beach profiles using transects, aerial imagery, and wave transmission through the structure. All of this is reported to inform the construction of the remaining sections of reef. Monitoring also takes place looking at coastal erosion of the surrounding area.

The initial work published on this study was meant to be a trial implementation, before the full-scale reef implementation went into effect. Initial pilot units were installed in 2015, and since then the complete implementation has not yet occurred (1). In June of 2022 the final funding was earmarked for the implementation of the project, showing a minimum of 7 year gap before the full scale intervention could be implemented (4). Artificial reefs in the Caribbean are also prone to developing biotic communities that differ from naturally forming reefs, so active fisheries management is required (3). 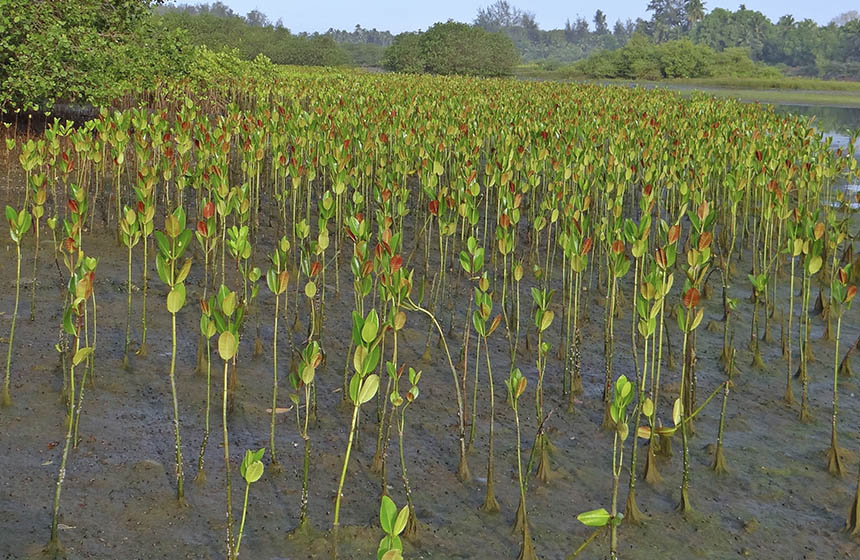