Landscape restoration, sustainable agriculture, and water and soil conservation in a montane landscape

Populations in the Mount Elgon region of Uganda face imminent challenges as a result of climate change including increasingly erratic rainfall and the melting of snow and glaciers resulting in flooding and subsequent drought. Ecosystem-based adaptation approaches were implemented to restore degraded landscapes, encourage more sustainable agricultural methods, and conserve water and soil resources.

Therefore, under the auspices of a multi-country effort led by the International Institute for Environment and Development, the International Union for Conservation of Nature, and the UN Environment World Conservation Monitoring Centre, local communities have participated in the implementation of various measures as part of an ecosystem-based adaptation scheme. First, more sustainable farming and irrigation practices have been encouraged to conserve water and soil including terracing, grass bunds and banks, hedgerows, agroforestry, mulching, the use of bio-fertilizer, farming along contour lines. Furthermore, reforestation, agroforestry, and riverbank restoration efforts aimed to restore ecosystem health. The introduction of fuel-efficient stoves have also reduced deforestation impacts as demand for firewood has decreased.

The districts of Kween, Kapchorwa, Sironko and Bulambuli in the Mount Elgon region are already facing significant climate change-induced challenges. Rising temperatures are predicted to melt glaciers and snow inducing flooding followed by drought. Rainfall is also expected to be delivered in extremes, with more intense rain in the wet season and less rain in the dry season. These changes have already greatly affected agricultural productivity and provoked more flooding, dry spells, landslides, and soil erosion. Efforts to recover agricultural yields have led to the overexploitation of ecologically sensitive areas and encroachment upon river banks compromising water availability and quality. Deforestation, poor land management, and unsustainable farming practices compound these issues by causing soil degradation and erosion.


Tree planting has reportedly helped address soil erosion and community interviewees agreed that ecosystem resilience had increased due to the implemented interventions. Forested and grassland areas are now considered to be more resilient to climate change as a result of a decreased risk of landslides and an increased ability to cope with extreme events. The observed increase in water flow has reportedly increased vegetation growth. The tree-planting in turn improves the retention of available water improving the quality of the water catchment area.

The introduction of improved agricultural practices has reportedly increased yields improving the incomes of farmers and likely contributing to local food security. An observed more stable water supply has resulted in local health benefits. The intervention aimed to build local institutional capacity to maintain the benefits of the interventions.

The IUCN worked with multiple branches of the federal government, local governments, Members of the Mount Elgon Conservation Forum, and the Makerere University Institute of Natural Resources to implement and manage this project.

This project was funded by the Federal Ministry for the
Environment, Nature Conservation, Building and Nuclear Safety.

There is participatory monitoring program in the area, where monitoring, reporting, and verification are conducted by the local community. A baseline survey was conducted at the start of this project in order to compared changes over time.

Some of the changes implemented lead to short term reductions in food production capacity as areas were restored and previously farmed lands were seeded with native vegitation. 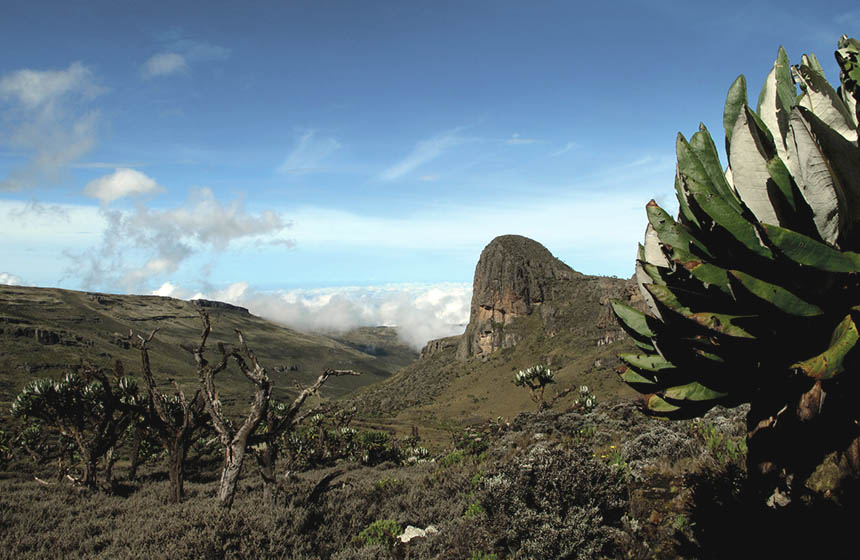