Seven village cooperatives in Humbo, with the support of World Vision Ethiopia, practice FMNR, a low-cost technique that restores and regenerates cut down trees faster than planting seedlings by encouraging sprouting from tree stumps and root systems (1). By emphasizing the regeneration of native vegetation, FMNR also avoids the potential negative consequences of introducing exotic species and addresses concerns about the reduced biodiversity associated with new plantations. Since the start of the project in 2005, farmers in the region have mastered the many techniques necessary to stimulate fast regrowth and take care to regenerate a wide variety of species that provide both material, food, ecosystem, nitrogen fixing, and carbon sequestration benefits. Through written agreements between local communities, the most severely overgrazed and overcut areas were closed off for use exclusively by FMNR-practicing farmers. Additionally to the implementation of FMNR, local communities planted a further several hundred hectares with indigenous and commercially-viable tree species to add to reforestation efforts.

Across Ethiopia, only 4% of native forests remained prior to the start of the project. These FNMR efforts have helped to restore the forests and overgrazed lands of Humbo which, much like those across the rest of the country, have suffered extreme deforestation pressures largely due to a nation-wide need for agricultural land and food (4). The region in which Humbo is located also plays home to unique biodiversity with 10 endemic species on the IUCN red list who stand to benefit from the restoration (3). This project also provided significant revenue for the local community as World Vision’s first Clean Development Mechanism project. In addition to economic benefits for farmers and the affected communities, improved soil quality and stability has reportedly led to better recharging of groundwater and reduced flash flooding. Furthermore, the drastically increased vegetative cover has led to increases in several biodiversity metrics and the return of native animal species that had previously disappeared from the area.

The FMNR and reforestation efforts resulted in the reported sequestration of around 165,000 tonnes of CO2 by 2018 and generation of USD $500,000 in carbon offset revenues for the community through the World Bank’s BioCarbon Fund (2). It is estimated that 870,000 tonnes of carbon dioxide equivalent will likely be removed from the atmosphere over a 30-year period (2009-2039) (2). The 2018 proposal for continuation by the UNFCCC projects that the ongoing management of the Humbo forest will result in 28,773 tons of anthropogenic CO2 removals annually aligning with the projects found in previous studies(3).

Through conducting stakeholder interviews in 7 communities, researchers examined perceived adaptation benefits. Although not quantified, community members reported an increase in soil stability and decrease in siltation as a result of the forest and land regeneration efforts on the hillsides surrounding their farmland which is located downstream of the project (4). The vegetation regeneration also added soil organic matter and mulch to the soil which is likely to increase the water infiltration. Given research in other systems this is likely to help improve soil moisture retention allowing for an increase in drought resistance (9). This has helped provide greater soil resilience for local crops (9). One of the seven communities surveyed reported that the landscape had recovered enough in the first year of livestock exclusion to harvest 300 large bundles of grass from previously rocky and barren hillsides (4).


While no comprehensive assessment of ecosystem health outcomes of the FMNR has been conducted, two commonly used metrics, biomass and species richness, have been partially captured, showing increases compared to the pre-intervention state (4,5). A reported direct result of the FMNR and reforestation activities is the restoration and sustainable management of several thousand hectares of formerly degraded forest with a measured average 2-5 m of tree regrowth since the start of the project. These efforts have increased the presence of five indigenous fruit tree varieties (4). In 2020 researchers identified 8 species of large and medium diurnal mammals within the Humbo Community Based Forest Area, including greater kudu (Tragelaphus strepsiceros) , warthogs (Phacochoerus africanus) , Anubis baboons (Papio anubis), and lions (Panthera leo) (5). Though more comprehensive surveys of biodiversity above and below ground are needed, the apparent increase in the diversity of a wide range of diurnal mammal species diversity suggests the FMNR has improved ecosystem health (5).

Carbon offset revenues generated by the project have been used to improve the livelihoods of local communities. Project monitoring reports highlight that these revenues have been used to build eight flour mills, nine grain stores, purchase 240 solar panels, and provide improved access to micro-credit (2). Local community members have reported that improved land management has increased yields of non-timber products such as honey, medicine, fibres, and fruit, likely contributing to the diversification of household economies. Improved agricultural yields and established plant nurseries for both native and commercially viable tree species have reportedly improved the income and livelihoods of communities in the area, 85% of which were reported to have been living in poverty at the start of the project (2). By the second year of the project, when all collaborating communities began pruning tree regrowth, the project reported improved capacity to meet firewood needs in the area.

The current governance structure relies on the seven local forestry cooperatives, which were established in each of the 7 villages with historical claims to this land. These forestry cooperatives work together and have established clear user rights for the forest adjacent communities (6). The cooperatives are open to all village members to join for a small fee and most community members have chosen to participate. This has led to positive governance outcomes through the Forest Development and Protection Cooperatives which strengthened local leadership capacity. The continued success and support for the project over 15+ years also signifies the strength of the local governance and support.

Initial project financing was provided through World Vision Australia in collaboration with World Vision Ethiopia. Continued financing to the community occurred through the World Bank Carbon Finance Unit’s Africa portfolio to receive payments for emissions reductions. By 2018 the sequestration of 165,000 tonnes of CO2 generated 500,000 USD as payment for the carbon offsets (2). Through the re-approval of the scheme in 2019 by the UNFCCC, funding from potential partner countries (Spain, Japan, Italy, France, and Luxembourg) was secured as established lines of carbon finance included in the proposal (3). This allowed for the continuation of the current carbon credit finance clean development mechanism.

In the 2018 application and subsequent 2019 approval of the project as a large-scale carbon-offsetting operation by the UNFCCC, key strategies for monitoring, reporting, and verification were identified (3). These strategies outline what they would like to evaluate, the parameters of measurement, the frequency of measurements, and the sampling methodology. Scientific papers have also played an important role in publishing independently verified studies on the ecological properties and progress of the project.

There was a reported trade-off between local livestock grazing and forest health, with the closure of the forest resulting in the displacement of cattle owned by local people which used the lands for grazing (7). The poorest community members do not have marginal lands or money to purchase fodder and depended on the forest grazing area to feed their livestock, however the implementation of FMNR has led to an increase in the amount of fodder generated within the area (4). Alongside the increase in species diversity there has also been an increase in human-wildlife conflict, specifically with primate species (Anubis baboons and Grivet monkeys(Chlorocebus aethiops)) (8). These animals often raid crops, but local farmers have reported success in mitigating harm through crop guarding and other mitigation strategies. The governance structure has also suffered from some key shortcomings such as the limited participation of youth and women due to the heads of households being the individuals most heavily involved in the project. However, the project remains open to all local residents if they pay a fee to join, and the investment in local infrastructure projects benefits all residents including non-members(7). 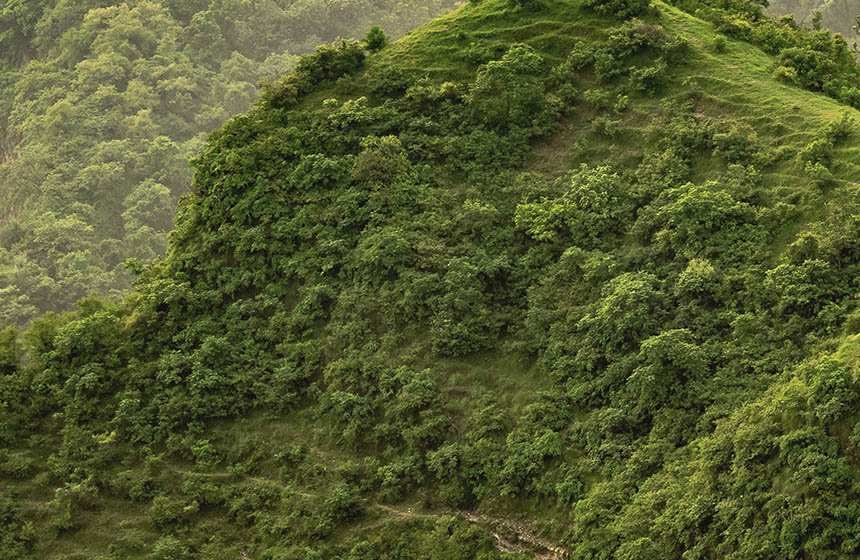