Bolivia Across the country at high elevations

In Bolivia, all vicuña fibre is harvested from the wild animals by local communities which have been granted the legal right to capture, shear and release the wild vicuña on their communal lands. Organized into registered Vicuna Manager Communities (CMVs) and grouped into Regional Associations of Managers of Vicuña (ARMV), including indigenous groupings such as Quechua and Aymara, the communities use a modified traditional practice from Incan times with religious and ceremonial aspects called the chaku to herd the animals between September and November. There is great potential to expand this initiative, as only around 6% of vicuña fibre is harvested in Bolivia and many communities do not yet participate in the system, due to barriers such as lack of knowledge, lack of tools and materials, and organizational issues, as well as broader challenges such as bureaucratic regulatory environments, traceability requirements, slow issuing of permits and long delays in receiving payments.

Vicuña are wild animals in the camelid family, closely related to alpacas and llamas, native to high-altitude areas of South America, including Bolivia. The vicuña fibre is used like wool to make clothing for high-end luxury markets, usually to end customers in Italy. Highly sought-after for their soft and lightweight wool, by the mid-twentieth century vicuña populations had been decimated as there were no clear user rights to this open access resource. After a ban on the hunting and sale of vicuña was implemented and the Convention for the Conservation and Management of Vicuna was agreed upon by Andean states in the 1970s, vicuña populations began to steadily increase again. Following the success in population restoration, the sustainable use and trade of vicuña fibre has subsequently been allowed, however challenges remain with the threat of poaching, disease and rangeland degradation. One third of the global population of vicuña lives in Bolivia, where the vicuña are officially property of the government. As the communities who manage the vicuña are some of the poorest and most isolated in Bolivia, living in inhospitable climates and unproductive land with little income-generating opportunities, the supplemental source of income from the vicuña fibre can have a significant positive impact, complimenting other activities such as raising of domestic camelids like alpaca or llamas, as well as other livestock. The continuation of international trade, which underpins this conservation model, is crucial to the long term sustainability of the program, as well as the ongoing support from the national government and guidance and financing from NGOs and the international community.

The much-needed complimentary income from the sale of vicuña fibre improves the social and economic resilience to climate change and other shocks, as noted in project reports. Moreover, the initiative stimulates native species and habitat conservation, contributing to the ecological resilience and adaptive capacity of the landscape.


Since this communal management approach was initiated, vicuña populations have reportedly rebounded dramatically, from 3,000 individuals in 1969 to an estimated 163,331 in 2018, according to a CITIES project report. The initial hunting ban and subsequent process of assigning use rights to communities and enabling them to benefit through international trade has led to engaged communities protecting the vicuña from poaching, as well as actively conserving its habitat, which includes other important flora and fauna and some vulnerable ecosystems such as peatland. However, it should be noted that vicuña populations have not yet recovered in certain parts of the country and poaching remains an issue, resulting in a reported mixed outcome for biodiversity conservation.

Exports of the fibre were permitted as of 2006, and between then and 2014, communities have reportedly gained over USD $3,720,000 from the activity, improving families’ income. Importantly, the communal management system has reportedly helped strengthen communities’ claims and access to land and land title rights, while better defining their territories, incentivizing people to remain living on their traditional lands, and giving the communities more visibility and a stronger voice in national institutions, with women reportedly participating actively in every level of the initiative. The activity has also reportedly worked to revitalize ancient traditions and indigenous knowledge around vicuña management.

The trade in vicuña is governed by 100 registered Vicuña Manager Communities which work directly with the animals. There are then further group into o 11 Regional Associations of Managers of Vicuña (ARMV), which have representation from multiple indigenous local groups. The fibre harvested from all the CMVs is stockpiled into a single batch and a community organization named ACOFIVB is responsible for marketing all vicuña fiber, with the government’s authorization. These institutions are then further supported by the government and NGOs.

The trade in financed by luxury brands which intend to transform the wool into fashion items for mostly European markets. In the spring months, the year’s fibre is sold to one international buyer and 85% profits of the sale are then distributed to the communities, with some royalties going to the government and to the marketing organization.

The amount of vicuña fibre is monitored through its active trade which can be interpreted as an indicator of current vicuña populations.

There can be a long timeline before the benefits of vicuña harvest reach a community, often over a year, so this causes some communities to loose interest in the program. 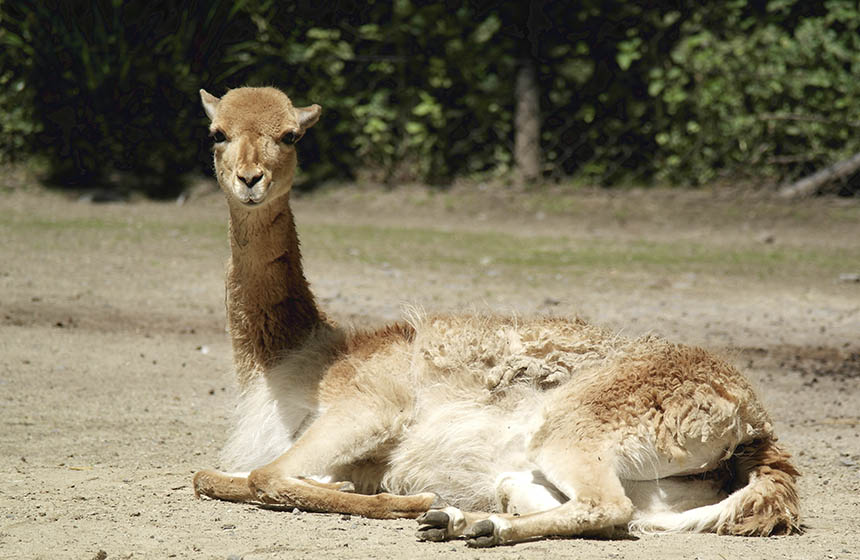