Ecuador Ecuadorian village of Buenos Aires in the Chimborazo Province

One landowner has created the first analogue forest in Chimborazo province, using ecological associations of various trees to aid in the conservation of endangered species.

In the village of Buenos Aires, Ecuador, Mr. Manuel Ramón created an analogue forest on a deforested area of his property. Analogue forests aim to become ecologically stable and socio-economically productive by mimicking the structure and ecology of natural forests. Centrally, the landowner created two ecological associations between six species: one between mahogany (Swietenia macrophylla) and Ecuador laurel (Cordia alliodora) and the other association between the Brazilian fire tree (Schizolobium parahybum), teak (Tectona grandis), mahogany, and Ecuador laurel. Through trial and error, he was able to better understand optimal planting distances and times and adapted his techniques continuously. These methods also reportedly helped to improve soil moisture and fertility of the area over time. In total, Mr. Ramón has succeeded in restoring a 10-hectare forest.

As a former logger turned conservationist, the landowner was also able to identify specific species best suited for timber production, and with these revenues was able to hire three workers, extending the economic benefit of his project to the broader community. With conservation continuously in mind, he collected the seeds from the best trees to create and maintain a nursery of saplings that would replace each harvested tree. He has since collaborated with the government to attract tourists and researchers to spread knowledge about his conservation techniques.

Although the impact of the analogue forest has not been quantified, the increased planting and conservation of trees, as well as the sustainable small-scale timber production predicated on replanting trees, reportedly aid in carbon capture in the area on a small scale.

Although no adaptation outcomes were reported, the landowner’s focus on regenerating and protecting endangered species will likely strengthen the resilience of these species in the face of climate change. The provision of habitats in the analogue forest will likely further reduce the vulnerability of other wildlife to climate change. The analogue forest reportedly improved soil moisture retention due to the accumulation of organic matter.


A resilient, ecologically stable analogue forest has been created reportedly providing climate regulation, habitat for fauna including reptiles, bats, birds, and armadillos, recycled nutrients, pollination via the presence of bees, seed dispersal, and regulation of the hydrological cycle. The landowner claims to have specifically targeted endangered tree species in his forest to aid in their regeneration.

The landowner was able to extend the economic benefit of his small-scale, sustainable timber production by hiring three workers from the local area. Oranges and other additional food sources are cultivated in the forest. The timber produced provides material for construction, furniture, sawdust and firewood for the local community.

This is Mr. Manuel Ramón’s land and falls under his active governance.

With no external funding Mr. Manuel Ramón was able to create the intervention.

Active monitoring took place to adapt the plants and methodologies of the analogue forest in order to achieve the best results. 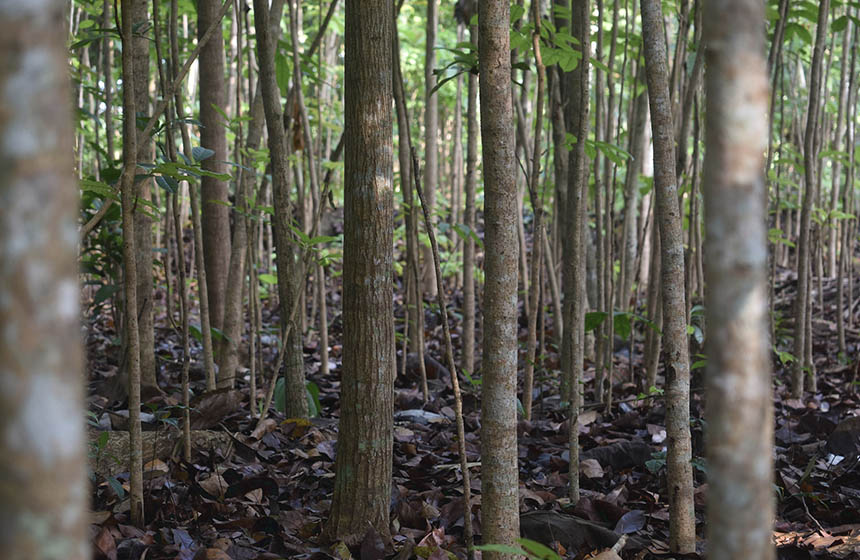